Cannabis legislation around the world

A round-up of the different cannabis laws in the world

Cannabis legislation varies widely around the world. It is easy to get lost with all the legislative nuances. We explain the difference between therapeutic cannabis and cannabis recreation as well as between legalization and decriminalization.

Difference between therapeutic and recreational cannabis

While several countries have legalized therapeutic cannabis, only Uruguay has legalized recreational cannabis. The difference is in the use of the plant, not in its intrinsic nature. Canada is the second country in the world to legalize it since October 2018.

First, therapeutic cannabis is prescribed by the medical profession to patients as a drug. It is used to relieve symptoms or treat diseases. Powerful painkiller, among others, it is also known for example to avoid epileptic seizures. In Canada, the CBD molecule (see our article: What is CBD?)has already been prescribed to babies with major seizures because it has few negative effects. (To learn more read the article: Therapeutic Marijuana: An Immediate and Spectacular Effect.)

Recreational cannabis, on the other hand, is not used for medical purposes.

In Switzerland, the situation is special. Cannabis plants that can be grown should not contain a psychoactive substance (see our article: What does the Swiss cannabis law say?) and contain a lot of CBD. However, Swissmedic does not recognize any therapeutic effect to the plant. Cannabis is therefore not used for medical use. It is even illegal to promote it for medical purposes, and it is forbidden for a doctor to prescribe it. In the end, it is recreational use that is regularized in Switzerland, not therapeutics. But that doesn’t mean it’s legalized!

Difference between legalizing and decriminalizing cannabis

It is important to understand the overriding difference between these concepts in order to grasp the issue. Currently, two countries around the world have already legalized recreational cannabis: Uruguay and Canada. The state controls the production as well as the sale and taxes are levied on the economy of cannabis. There are also several US states that have taken the plunge, but cannabis remains illegal at the federal level.

Legalizing does not mean without rules, the sale and production are controlled, as for alcohol. In Uruguay everyone can grow six plants for personal consumption and the sale is only done in pharmacies. The state has granted a limited number of licences to large producers that supply the outlets.

Decriminalizing means that there will be no criminal or criminal prosecution for possession or cultivation of cannabis. Drug trafficking is still considered criminal activity. If a person has a small amount that varies by country, he or she will be subject to a fine or a reminder to order. France is one of the few European countries where possession of a joint can legally be punished by a firm prison.

There are intermediate cases, such as in the Netherlands, where cannabis is illegal, but the government has laws flexible enough to make it possible for trade in Amsterdam’s famous coffee shop. In the Netherlands, coffee shops can possess 500 grams of cannabis, while in Switzerland it is tolerated to possess 10 grams of narcotic cannabis. Thus, there are around decriminalization, more or less flexible rules that govern consumers and producers. This allows people to remain legal despite the possession or cultivation of an illegal product.

Cannabis legislation around the world

Here is a map of the world, which may be error-pronged, but which allows us to better understand the different laws concerning cannabis. Indeed, many governments have recently decided to change their cannabis legislation, which is being debated everywhere. 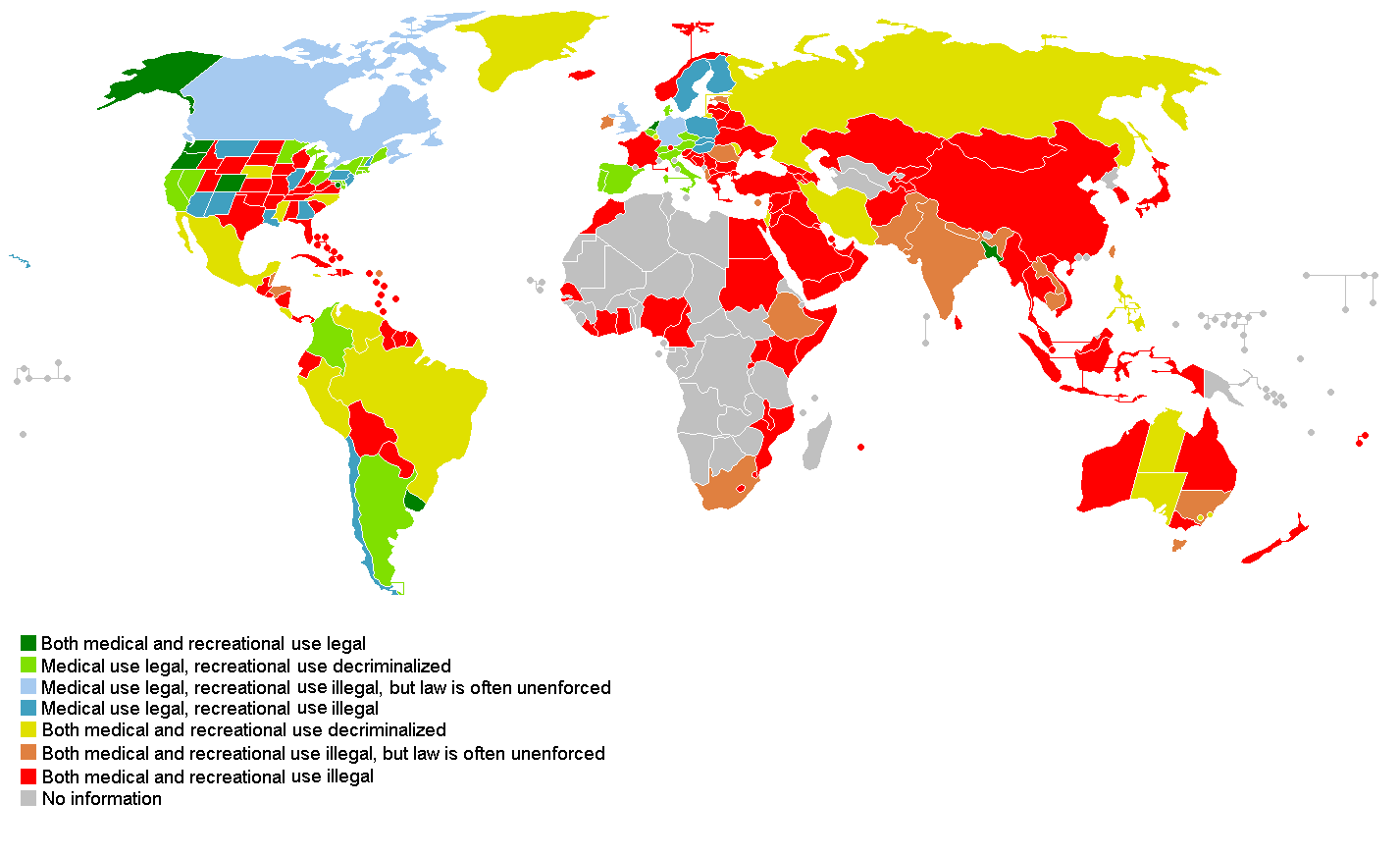 What are the consequences of legalizing medicinal cannabis in Canada?

Canada has legalized recreational cannabis since October 17, 2018, in addition to therapeutic cannabis. It is now possible for adults to buy them – without a prescription – from government-approved sales sites – physical or on the internet. It will be legal to have 30 grams and, in most regions, to grow a few plants for individuals.