What is the life cycle of a cannabis plant?

What is the natural life cycle of a cannabis plant?

What is the lifespan of a cannabis plant?

The cannabis plant is annual. This means that cannabis will only flower once a year and then die. From germination in the spring to the natural death of the plant in the fall, takes about 6 months.

How does a new cannabis plant develop?

The cannabis plant comes from a seed. A seed to germinate, needs moisture and the soil is a little warmed (more than 10 degrees constantly). In the wild, the seeds remain on the ground during the winter, and will germinate in the spring when the temperature is adjusted. At first after germinating a root will come out of the seed. Then, in a second time the seed will try to get out of the ground and warm up. It will have only two leaves and a stem that it will force to grow until it is satisfied with the outside temperature. Only then will the stem stagnate, the two small leaves will grow, and a new leaf floor will grow. 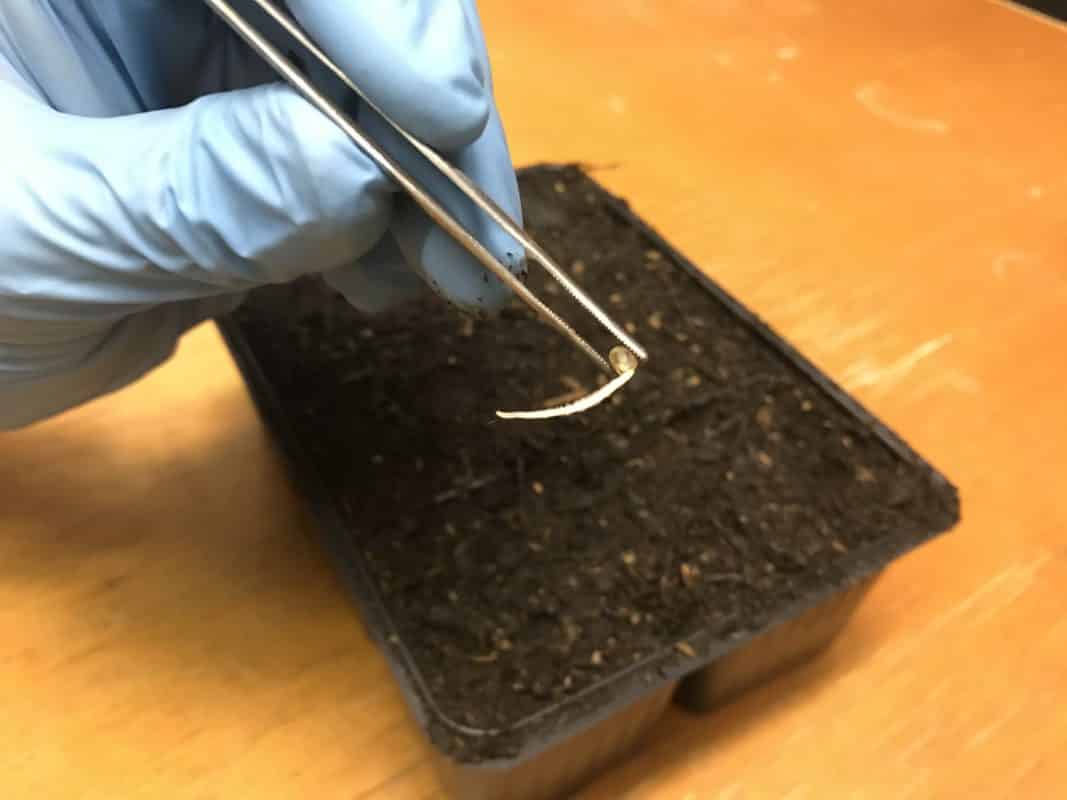 Exit from the root 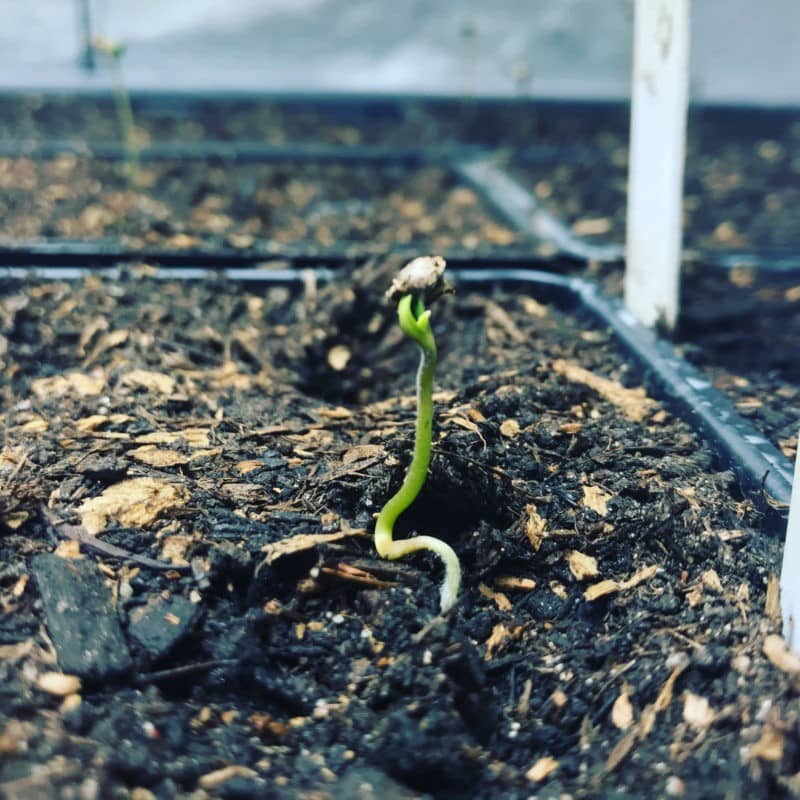 The plant is looking for heat

How do I get a cannabis seed?

Cannabis is a dioic angiosperm plant. Angiosperm means that it is a flowering plant (as opposed to fern or moss). While dioque means that every cannabis plant is unisex: it is either a male or a female.

In the majority of plant species, each flower contains both stamens and pistils. But some variants also exist. Zucchini will make male flowers on the same plant (without pistils), and female flowers (without stamens). All tastes are in nature!

For cannabis, male plants will grow small, purse-shaped flowers containing pollen-covered stamens. When the flower opens, the pollen present will be dispersed through the wind.

Female cannabis plants make flowers on which pistils grow. These pistils contain eggs that are waiting to be fertilized by pollen from male plants.
When pollen is deposited on the female cannabis flowers thanks to the wind, seeds begin to develop in the female flower.
These seeds can then fall off because of the wind, be eaten by birds, or hang on the plant until it dies and falls to the ground. 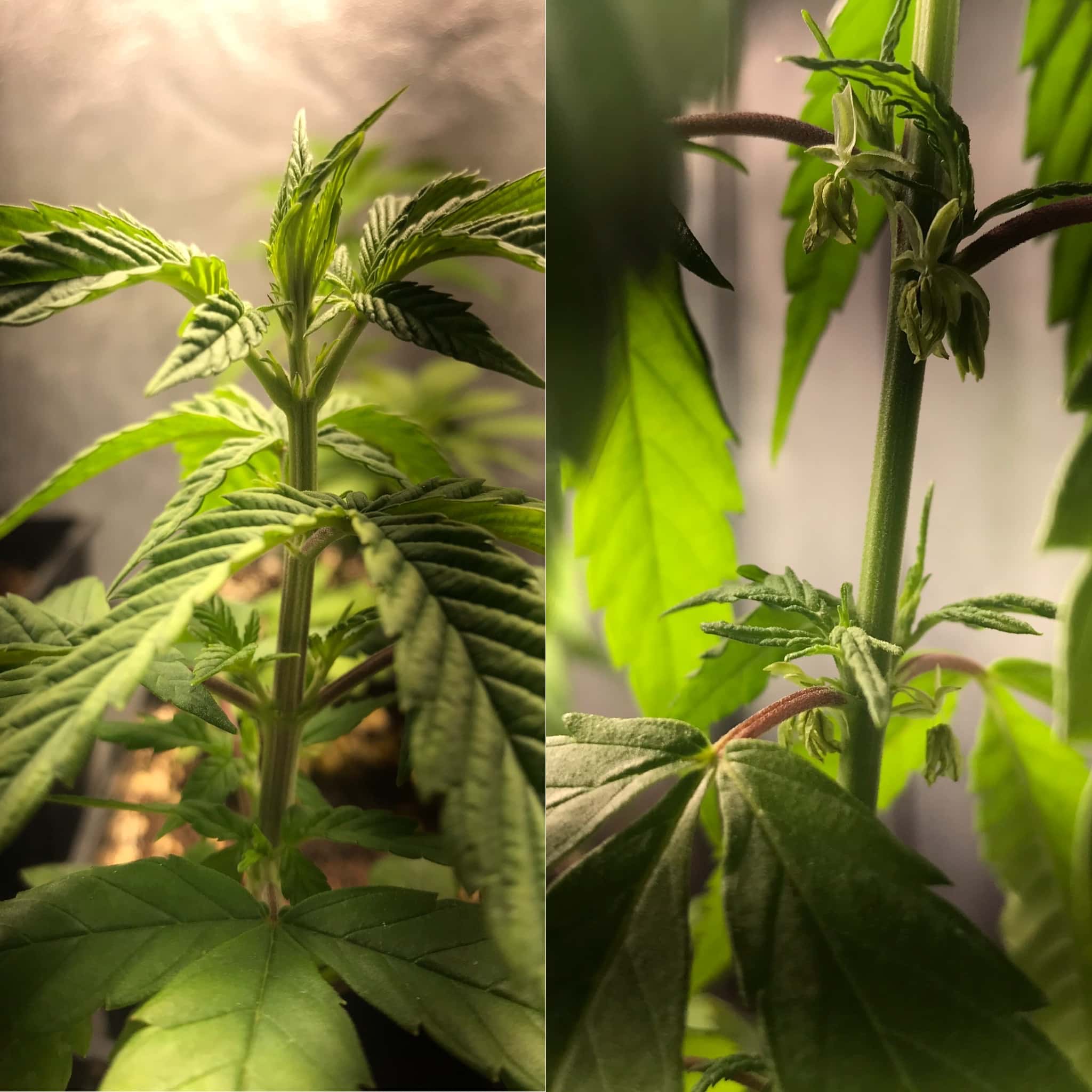 How does a cannabis plant grow?

A cannabis plant needs light, water, and heat to grow. If you remove only one of these elements, your plant will stagnate, or even die.

Cannabis is a photoperiodic plant. This means that it guesses at which season it is based on the amount of light it receives and will adapt its growth in order to reproduce before winter. For example, a cannabis plant needs more than 12 hours of light a day to grow well. Indeed, having a life cycle between spring and autumn, less than 12 hours of sunshine mean to the plant that it is not in the right season, in winter, and that there is no point in fighting for a living since the conditions are not met.
In the same vein, when the cannabis seed germinates in the middle or late spring, the days will be longer and longer. At least 14 hours of sunshine. By the time she is born and germinates, as explained above, she will notice that the days are getting longer. As long as the days get longer, she knows that she is in spring, so at the beginning of her life. She won’t be in a hurry and will take the opportunity to grow up. Indeed, the larger it is when it blooms, the more flowers it will have, the greater the probability that pollen from a male plant will cross it. Cannabis therefore has an interest, at the beginning of its life, to grow as much as possible, and not to flower.

Heat is paramount because the plant will freeze below 10 degrees. This is why it avoids developing in winter and does not grow below 12 hours of daylight.

Finally, water. The cannabis plant is a drinker, by the roots, or by the leaves, not well supporting arid climates. Without expecting daily rains, a cannabis plant will grow very poorly if the temperature is very high and it does not rain. 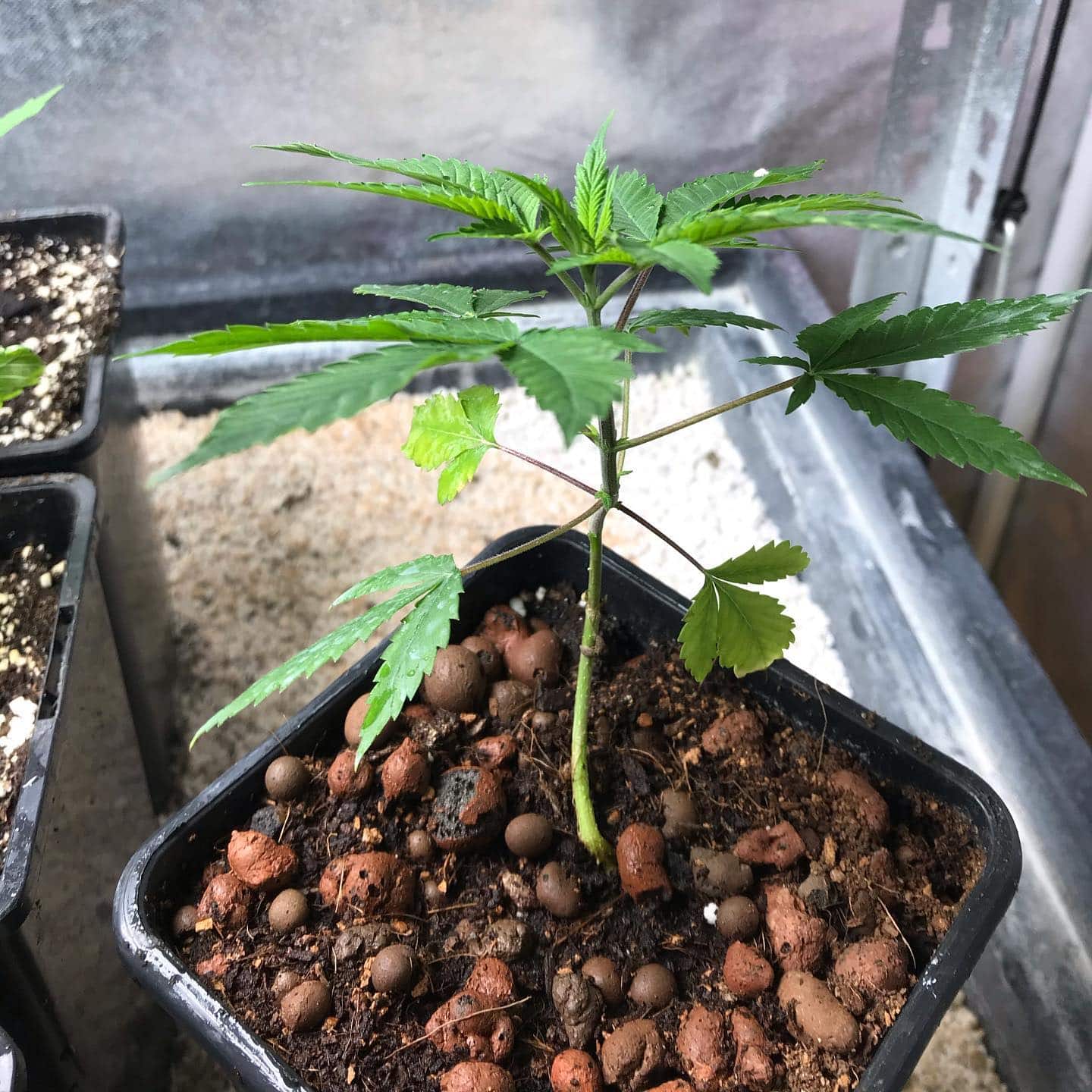 Several floors of flowers are visible, this plant grows.

How does a cannabis plant bloom?

A cannabis plant will flower when it notices that the days are getting shorter. Indeed, she will know in the middle of summer, that autumn is approaching, her breeding season, then that winter will come and that it will be over for her. When cannabis plants pass in mid-August, they should all come into flower. The daily sunshine period drops below 14 hours, causing them to bloom. At this point, it stops its growth, to put all its energy into the production of flowers. It will no longer produce new roots, for example.
The male cannabis plant will flower very quickly. It will only take a few days to create a new flower from scratch as it opens and releases pollen. A male cannabis plant will flower several times between August and October.
The female cannabis plant has a relatively slow flowering. Indeed, between the beginnings of flowering and the finished form of the flower, it can take up to two months. Normally from September, the female cannabis plant will already have flowers mature enough to be pollinated and form seeds. If the plant starts to be pollinated, it will expend its energy to make seeds and reduce the development of its flowers. If not pollinated, it will continue to develop beautiful large flowers until its death. In reality, we only use female flowers in cannabis. They are developing cannabinoids such as THC and CBD. The flowers we sell at High Garden are female flowers, not pollinated. That’s why in cannabis crops, we put a lot of effort into having no males nearby. Because people use female cannabis flowers, and they stop growing when they develop seeds, and therefore produce cannabinoids, we want to prevent them from getting pollinated at all costs. 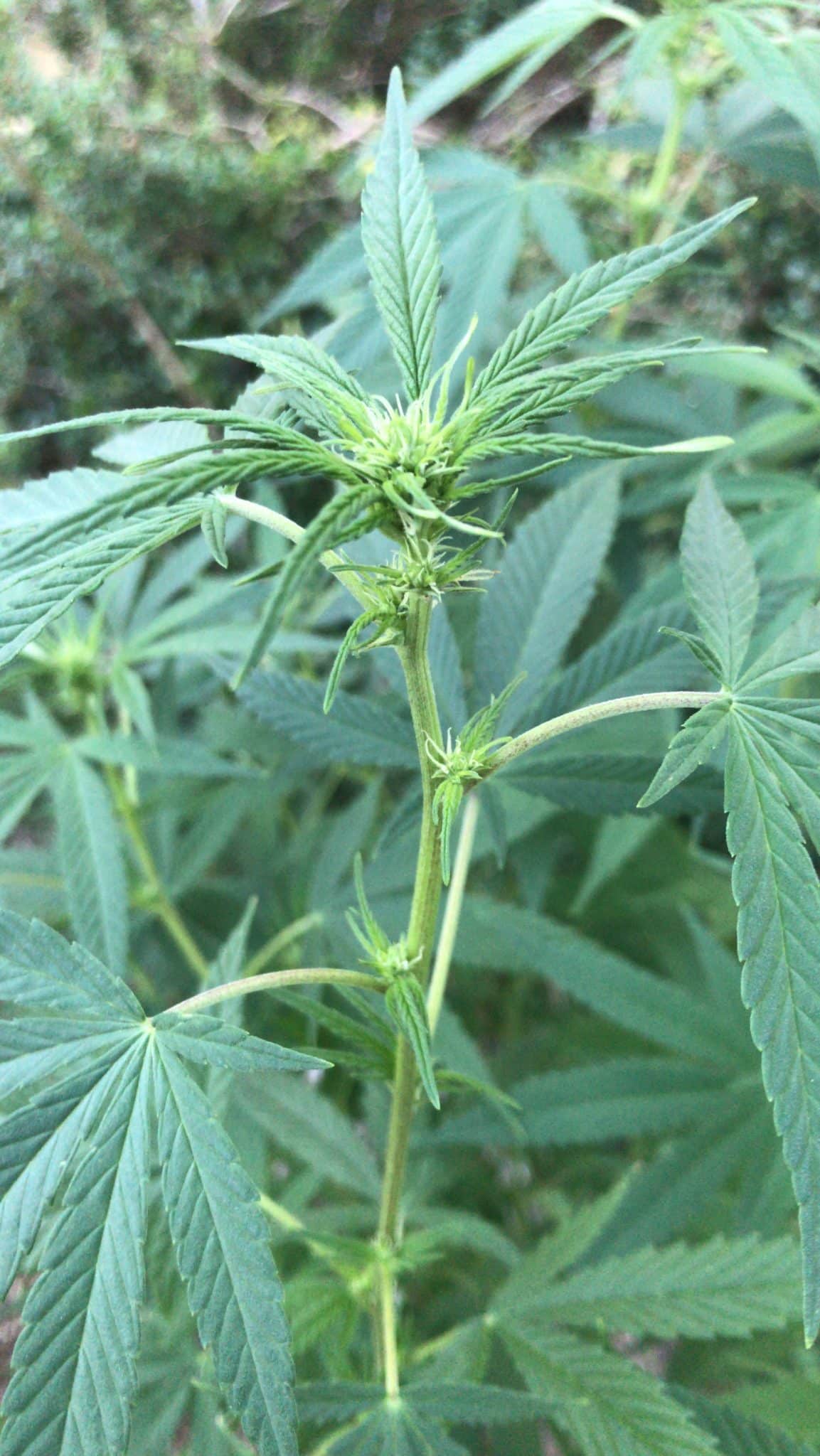 Start of flowering of a female cannabis plant 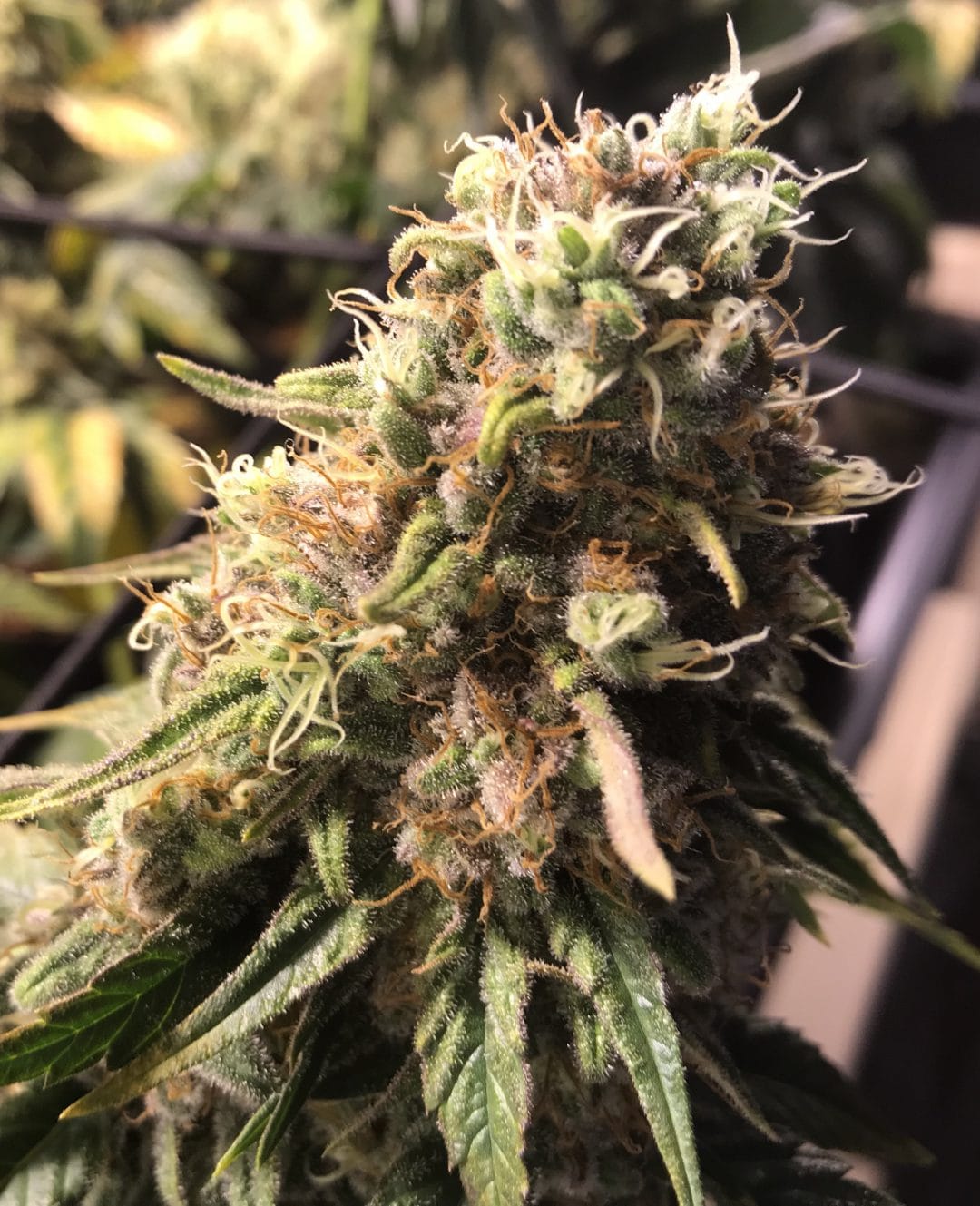 The flower is almost ripe

How does a cannabis plant die?

A cannabis plant can die for several reasons. First, the cannabis plant stops growing once it is in bloom. She will no longer expend energy to grow her roots. She will not be able to find deeper nutrients for example, she accepts that her death happens.

The first natural cause of death of a cannabis plant is freezing. Indeed, a cannabis plant fears freezing which means that when the temperature drops below 10 degrees Celsius, the water present in the roots, trunk and stems freezes. A plant that has frozen will not be able to resume its development when placed in an environment where the climate is above 10 degrees. Cannabis cannot go dormant, as the bottom of the plants called perennial. Perennials are plants that support winter and can be enjoyed by flowers or crops for several years. That’s why, in contrast, cannabis is an annual plant.
Annual plants are plants with a very short lifespan (a few weeks), or that do not withstand the cold. These are plants that live between spring and autumn.

The second reason is mold, or more generally, the development of fungi. Cannabis developing between spring and fall, if autumn is very rainy and humid, the cannabis plant is likely to be attacked by fungal pests. Whether it is mildew, oidium or botrytis, these fungi can attack the cannabis plant very quickly. These fungi will make the plant unable to grow by attacking either the roots, leaves or trunk. There are many other types of fungi that can wipe out a cannabis plant in a very short period of time.

There are several other reasons for the death of a cannabis plant: cut trunk, drought or pests, but they are less part of the natural process of the plant outdoors, which is why we do not address them here.

When to harvest a cannabis plant?

Cannabis flowers will all mature at the same time. It is not like a tomato plant that allows you to harvest several times throughout the season. The harvest is therefore done when all the flowers have reached their optimum maturity, about two months after the start of flowering. To do this, we observe the plant’s trichomes, whose color indicates their maturity.
But it is no longer the life cycle of a normal cannabis plant to be harvested. We will talk in a later article about the life cycle of a cannabis plant on an outdoor farm. 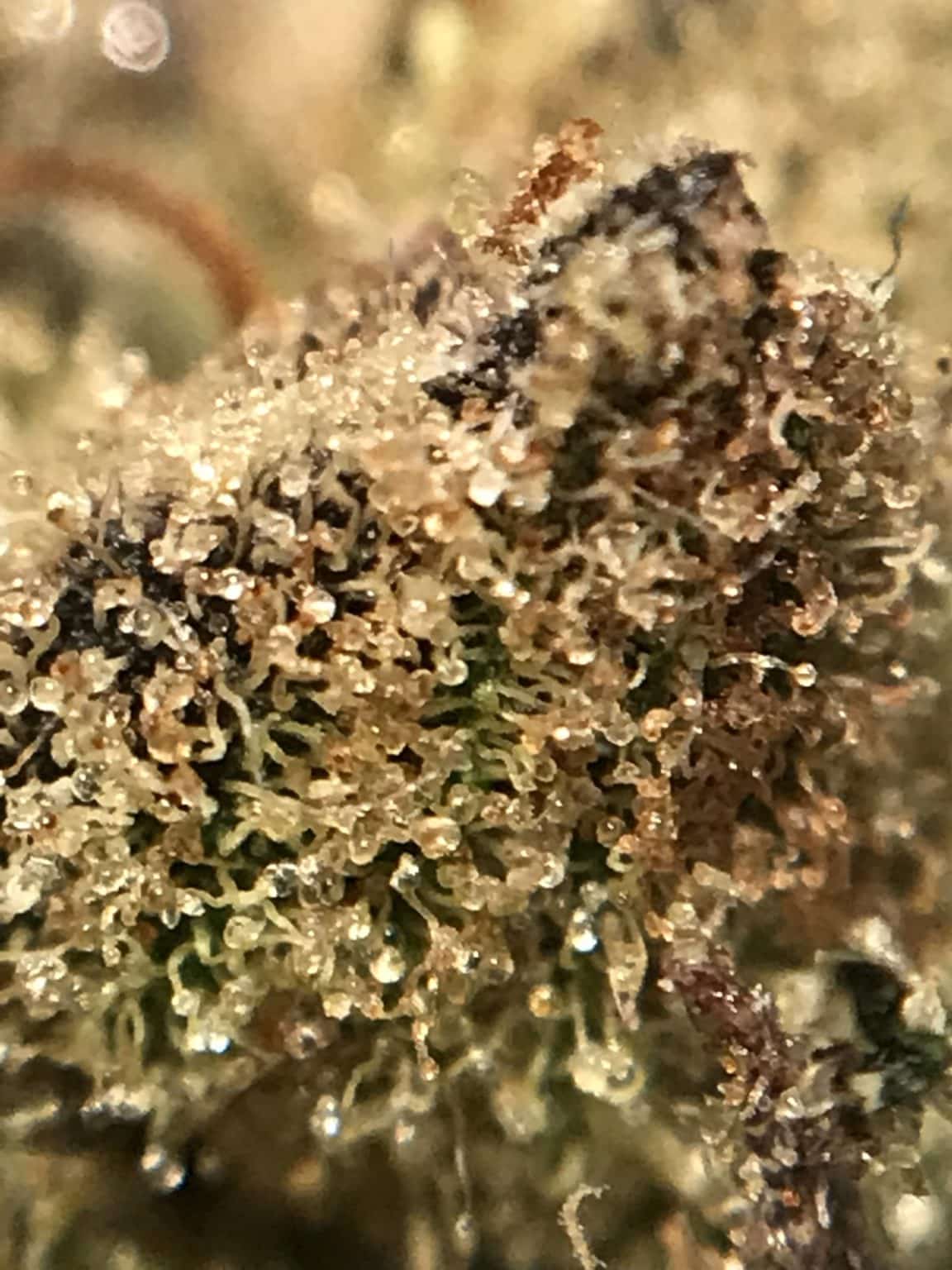 Close observation of a cannabis plant

Cannabis, however, is a much more complex plant than presented here. For example, a stressed cannabis plant can become hermaphrodite to ensure its own reproduction. This is not its preferred mode of reproduction, since it impoverishes its genetic heritage by reproducing with itself, but it is a faculty that any cannabis plant has. That is why we must provide a constant climate when it is farmed if we do not want to develop a male flower.
In addition, cannabis has been successful in developing outside of temperate climates. Varieties grow for example in Siberia. These are varieties said Ruderalis, which have freed themselves from the photoperiod. Indeed, they are programmed to automatically bloom after a few weeks of life, no matter how many hours of sun they receive, since in these regions it can be daylight almost 24 hours.
In contrast, cannabis plants in equatorial climates where the duration of day and night is equivalent throughout the year, can alternate periods of flowering and growth, without ever letting themselves die. Indeed, the constant sun throughout the year, in intensity and duration, plunges the plant into a permanent doubt between flowering and growth. The temperature in these climates does not vary more than 5 degrees. The plant does not feel winter coming, and can grow perpetually. However, as it never really focused on flowering, the flowers obtained, will not develop to their full potential and is therefore not a technique developed for exploitation. This phenomenon is quite rare, and also difficult to control.

In conclusion, cannabis is an exciting plant. Its life cycle and distribution on the planet have allowed it to develop several reproductive and growth techniques. Scientists have played on these parameters in order to obtain for example only female seeds, impoverishing the genetic heritage of a flower by self-production by depriving it of male characteristic (Y gene). Another example is the cross-breeding of photoperiodic varieties with Ruderalis varieties, which allows very different varieties of cannabis to be grown almost throughout the year in temperate or equatorial climates.